Oysters Mornay are a French classic. Fresh oysters get baked in a flavorful, creamy sauce with swiss cheese for a decadent and easy appetizer and it's done in under 30 minutes!

Mornay sauce is a rich French cheese sauce. Traditionally made with Swiss or Gruyere cheese and a little Parmesan cheese, I've used cheddar instead of the Parmesan in this recipe. This is a popular sauce for topping eggs and vegetables like asparagus too.

This was inspired by my Miso Baked Oysters on this site, and pairs well with Crispy Japanese Fish Katsu or Easy Seafood Alfredo and a crisp Apple Kale Slaw for a special seafood dinner.

Oyster Mornay is a classic French preparation but don't be scared off, it's actually really easy and doesn't take too many ingredients.

To make this easy recipe, first make the Mornay sauce, then spoon on top of shucked oysters and broil until golden brown and bubbly. Easy, right?!

Note: This recipe makes more sauce than you will need for the oysters. You can double the oysters to make 24 servings of oysters if you've got a big crew, or save the extra sauce to pour over vegetables for a fancy veggie side dish.

Set a heavy bottomed, small or medium-sized saucepan over medium heat. Melt butter and add flour. Cook, stirring until butter and flour (roux) is well blended and bubbling. About 1-2 minutes.

Note: Salted or unsalted butter is fine for this recipe.

Remove from heat and add stock all at once, whisking quickly to incorporate well and prevent lumps. Return to heat, stirring frequently until thickened and mixture boils. Reduce heat to low as soon as it starts to boil.

Add cream (reserve 1 tablespoon for the next step) to the sauce in the pot and stir until cream is heated through, about 2-3 minutes.

In a small bowl, whisk egg yolk with 1 tablespoon of the cream and set aside.

Slowly add a ladle of hot cream sauce to the egg yolk, whisking constantly. This will temper the egg yolk so it mixes in without getting lumpy. Once it's been incorporated, pour the yolk mixture into the hot sauce and mix well.

Add lemon juice, whisk and then add both kinds of cheese. Stir once, then let melt, stirring occasionally.

Season with salt and pepper if desired. Mornay sauce is finished.

Pre heat broiler or oven to 500'F.
Prepare oysters. If large, cut into bite-size pieces and return to half-shell or place oysters in ramekins.

One large or 2 small oysters per ramekin or one oyster per shell. Place all shells or ramekins on a baking sheet.

Spoon sauce over oysters to cover. Sprinkle lightly with paprika if desired.

Place baking sheet of oysters in the oven under the broiler.

Broil 4-6 minutes until starting to brown. Set the timer so you don't forget about them! Turn broiler off and let oysters cook 1-2 more minutes before removing from oven.

Tip: If you are baking oysters in the shell, pour rock salt on the baking tray to set the oyster shells in so they stay up without tipping over.

Serve while warm with crusty bread and extra wedges of lemon or hot sauce.

Love a good, baked seafood recipe? You've gotta try my Roasted Miso Glazed Salmon, it's always a crowd favorite and so easy too.

No special equipment here. No ramekins? Use the oyster shells or other oven proof dish. No broiler? Turn your oven up hot, to 500'F and bake an extra 1-2 minutes until bubbly and brown or bake them in a hot BBQ/Grill.

Like all seafood, these are best the day they are made but leftovers can be safely stored, covered in the refrigerator for 2 days after baking. Reheat in microwave or oven until hot. (Be careful of splattering sauce in the microwave. Cover with parchment or other cover when microwaving and wait 2 minutes before uncovering and enjoying.)

Extra Mornay sauce will keep well in the fridge for up to 6 days. Keep covered of stored in an airtight container and reheat over low heat, stirring frequently.

This finished recipe doesn't freeze well once made though you can freeze the components separately. Fresh, shucked oysters freeze well if stored in an airtight container as does the Mornay sauce.

Mornay sauce may separate when thawed. This can be fixed during reheating. To reheat Mornay after freezing, bring it to room temperature, then slowly reheat it in a heavy bottomed pot over low heat, stirring frequently. Add in a tablespoon of broth or butter if sauce seems too thick, and whisk in well.

I love adding a big squish of lemon to the sauce. While not added traditionally, it will keep your Mornay sauce from becoming grainy or stringy and adds a pleasant tang. While you can use a teaspoon of bottled juice, as always, a squirt of fresh lemon juice adds delicious, bright and natural flavor.

Can I use different cheese for Mornay sauce?

Yes! Traditional Mornay sauce uses Swiss cheese (Emmental or Gruyere) and a little Parmesan but you can use any cheese you like as long as it melts well. Cheddar is particularly good, as is fontina, muenster, Monterey jack, Havarti, and provolone. Try smoked gouda for a smoky twist or go bold with Taleggio or a blue cheese like Cambazola if you like a little funky flavor.

What are Mornay oysters?

These are simply oysters that have been baked or broiled with Mornay sauce on top. They are similar to the Japanese Oysters Motoyaki, oysters Florentine and oysters gratin in that these all have a creamy sauce.
Mornay sauce is a bechamel sauce flavored with swiss cheese and enriched with egg yolk. It bakes up bubbly and brown and pairs well with briny oysters.

How do you store live oysters?

Live oysters should be stored in your fridge until ready to eat or cook. Keep them in a plastic bag with holes so they can breathe but not get dried out. Before shucking, give them a rinse or a scrub in the sink to remove any loose dirt or shell.

How do you cook oysters Mornay?

Prepare oysters in their half shell or in ramekins. Cook the Mornay sauce separately, then top the oysters generously with the sauce. Place in oven, BBQ or under the broiler and bake/broil for 6-10 minutes until brown and bubbly.

For more on what I'm cooking up, follow me on Instagram or Facebook and pop over to check our my shop closing out sale at West Coast Kitchen Garden (50% off everything until sold out!!!) You might also like my FREE printable weekly meal planner.

Let me know if you try this recipe and if you do, I'd love it if you give it a star rating in the recipe card. 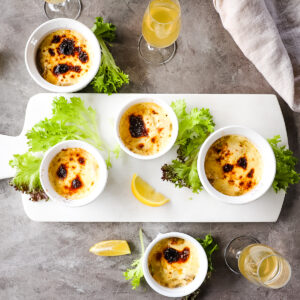 Hi, I'm Sabrina! Welcome to my West Coast Kitchen Garden. I hope to inspire you to grow, forage and shop your local farmer's market with these easy and delicious recipes using whole foods.