Beets are a superfood. For some raw beet recipes and cool facts, read 10 Surprisingly tasty ways to eat raw beets (from justbeetit.com). And if you want to read about all the health benefits of beets, this post on Improving your Immune System with Beets tells you all about the vitamins and minerals in this veggie. 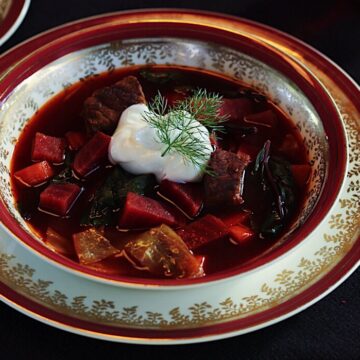 This traditional borscht is a comforting, sweet and savory beet soup just like my Ukrainian grandmother made it. Simmering it with beef adds rich body and becomes fall apart tender. Soft beets and cabbage meld together and create one of the most flavorful soups I know.This soup gets better with time so feel free to make it up to 3 days ahead or make and freeze up to 3 months.
4.98 from 43 votes
Print Pin Rate
Course: Dinner, Main Course, Soup
Cuisine: Ukrainian
Prep Time: 30 minutes
Cook Time: 3 hours
Total Time: 3 hours 30 minutes
Servings: 6
Calories: 316kcal
Author: Sabrina Currie

Hi, I'm Sabrina! Welcome to my West Coast Kitchen Garden. I hope to inspire you to grow, forage and shop your local farmer's market with these easy and delicious recipes using whole foods.